Well hello again! We never intended to be silent this whole summer, but somehow, that's what happened. Kyrie hung out at the dock in San Carlos from July 1 to October 11, and while it was a good thing because we would have gone stark raving mad from the heat, I think the entire crew is glad to be done. We got A LOT done in San Carlos, I'm grateful to say.

Here's the list: re-galvanized all our anchor chain; had new cockpit cushions made, recovered all our dinette cushions, and got new foam for Levi's bed; had an emergency tiller made; designed and installed stainless steel braceplates for the bulkhead between the dinette and our room; fiberglass repair in the head where bulkhead tabbing cracked on the way down the coast; a full Sunbrella cover for the deck and coach roof; Sunbrella covers for the foam on the dinghy, since it was beginning to disintegrate in the sun; and Kyrie's outside was cleaned top to bottom, including stainless and rigging. Whew, I think that covers everything we had done.

In addition, we took on a new crew member in July. In a somewhat, but not really, spur-of-the-moment decision, we adopted a former street dog in Guaymas. He had been tossed in someone's front yard and she took him to the vet because he was in rough shape--an eye infection, fleas, ticks, worms, etc. A week later, the little guy was ready for a home, just in time for us to meet and fall in love with him! Joe and I had been out running errands and brought the puppy home, much to our kids' shock and delight. We've talked about a dog ever since our old dog Bandit died, before we even bought Kyrie. Rio has been a welcome addition to the Kyrie crew, although he had a bit of a rough time on our crossing back to Baja! 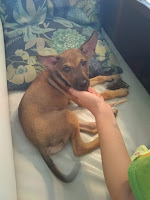 Much to our delight, our friends from SV Arena arrived in San Carlos in mid-August and life got much more interesting. They have four kids--the oldest two girls are Levi's age, the next girl is Rachael's age, and their son is Megan's age, so suddenly, everyone had someone to "play" with, even the adults! It was nice, even with being cautious about distancing from others, to have another couple to visit with, to later on go to Happy Hours with, and just have fun!

Road trips! We actually took a couple of road trips during our time in San Carlos, although they weren't exactly for fun. The first one was in September, up to Hermosillo. I had been worrying the entire time we were in San Carlos because the kids' passports expired the end of September and I didn't know how we were going to get them new ones. Passport offices were just starting to reopen in the States and there was a huge backlog. The Consulate offices' websites wouldn't let you make an appointment for new passports until they expired and it became an emergency. What to do?! I finally called the embassy in Mexico City and explained our predicament--that our kids' passports would be expiring, that we weren't planning on returning to the States any time soon and were frankly afraid of getting stuck there when our boat and home was in Mexico. I was told to email the consulate in Hermosillo, telling them exactly what I had just said. I did so, and half an hour later, we had an appointment scheduled for the following week! Car rented--check. Hotel reserved--check. Rio staying with Arena--check. Off we went! It was such an easy, uneventful experience! Not only did the kids get new passports, but Joe and I were also able to renew ours at the same time. Best of all? We picked up all five new passports in Guaymas two weeks later! What a relief!
Next road trip was just a couple weeks ago. The Arena crew decided to make the drive to KM 21, which is where new FMMs (tourist visas) can be obtained. Ours still had another month to go, but we were in a fairly convenient place to get new ones, whereas in a month, we didn't know where we would be. Cars rented, hotel rooms secured, pet sitter for Rio engaged--we were ready to go! The Kyrie crew ended up with a minivan and nearly all the kids (did I mention there were seven kids altogether on this trip?) enjoyed the mobile movie theater at one time or another on the trip. There were a few crazy moments, like when the car rental company gave Arena a car, instead of the van they reserved for the six of them--good thing we had the van--or when we overshot the office for our visas by about 40 kilometers, and had to turn around and retrace our steps! 945 kilometers driven in two days, all for eleven pieces of paper that made us all legal tourists in Mexico for another 180 days!
With all our tasks completed (for now, at least) it was time to get moving again. We had cabin fever something fierce and couldn't wait to start cruising again. October 11, we pulled out of the marina and used a friend's mooring ball out in the bay. A weather window would allow us to sail across the Sea of Cortez to Isla San Marcos, as long as we left around 4:00 the next morning, and we didn't want to be leaving the marina in the dark.

A Look Back on our Gear After a Year of Cruising

Thoughts from under the air conditioner

This will be a little less of the "what we've been up to," and more of a "what's going on in Kristen's head" post. We arrived in San Carlos on June 26, I think. Our reservation in the marina wasn't until July 1, so we had to drop anchor in the bahia for a few days. Those few days reinforced in my mind that we made the right decision. It was hot, with very little air movement, and the water temperature has risen enough that jumping in simply isn't enough for refreshment.
I can't remember now who told me this, but I thought it excellent advice. She said that she has figured out that for her own sanity (and that of whoever else is on the boat with her!), she needs a few days to a week in a marina every month. Normally, we try to avoid marinas, even if for no other reason than to extend our cruising funds! However, I know how Joe and I react to the heat. We lived in the central valley of California for the first six years of our marriage and tempers rose as the mercury climbed. Knowing we would be in Mexico this summer, without any easy way to get back to the states and potentially cooler environs, a decision had to be made--do we stay out in places to anchor, where we can self-isolate much more easily, explore a little bit, and potentially turn Kyrie into a powder keg with five roasting people, who will then say we can't take it anymore and end our cruising time? Or do we bite the bullet, fork over the money, don the masks, and plug in that air conditioner, considering it all an acceptable price to hopefully continue our cruising journey?
The wanderlust has not been satiated. The desire to travel is still strong. Therefore, for our sanity, we have made the decision to tie up here for the summer. It's not ideal, I have to admit. San Carlos is very quiet. The marina has lots of empty slips and most of the boats that are here are unoccupied. It does make this time of socially distancing easier--less people to avoid!--but it makes for long days. The whole crew usually spends time at the table simply because that's where the best air flow from the air conditioner is. Can you guess where I'm sitting right now to type this?
The hope, of course, is that somehow, Covid-19 will slow down and life can assume some semblance of normalcy. Will that mean we can continue to explore? Will other countries be open to us arriving, visiting for a while, and then moving on? Right now, we hope to work our way south, starting in the fall, and being in Panama by May, in order to transit the canal and move on to the Caribbean. Will that happen? This time, more than ever, is a time to not make big plans far off. I've never before experienced so much living my life day-to-day, but that's what has happened. Restrictions alter, places open and close with remarkable rapidity and just when I think I've adjusted to whatever is going on, the rules change and I have to learn them anew.
I miss people. I am not an introvert. While I like having time to myself when I need to get thoughts down on paper, I tend to recharge by spending time with friends. My batteries are rather low lately. I love my family, but it's hard to constantly be in this bubble. However, this is where I am right now, and I'm learning to revise my expectations.
Posted by Kyrie's crew at 9:51 AM 2 comments:

A month out of touch

After nearly a month in one spot, it was time to move on again. Besides, it's been getting hotter and us poor Alaskans are melting! We've seen temperatures in the 90s during the day, only dropping down to the low 80s at night if the high dryer-type wind doesn't blow up off the land late at night and roast us in our beds. We made the decision that on the next southerly, it was time to head across the sea to our reserved slip in San Carlos for the summer. We still have the air conditioner we bought in San Blas, so once we plug into power, we can be comfortably cool again. To be honest, I think we're all looking forward to being at a slip again for a couple of months. But, I'm getting ahead of myself.
Read more »
Posted by Kyrie's crew at 10:41 AM 3 comments: