This is such a weird post to write. Or maybe it isn't the post itself so much as the location. I'm typing this while currently sitting on the floor of our house. Yes, that's right. Here it is, January, just past our third anniversary of moving aboard Kyrie, and we're at this moment living in our house. It's a strange situation. Actually, it kind of hilarious. The house isn't huge by any means, but after living for the past three years in about 350 square feet, we're rattling around this place like dried peas in a pod. I don't know what to do with all this space!
First things first. No one get worried. We haven't changed any of our plans. We have less than six months to go until we plan to depart Juneau and head south. However, we have changed things up a little bit. Last month we made the big decision to sell our house. It's a major change. Up until December, we had every intention of renting out the house while we lived and journeyed on Kyrie, with the plan of returning to Juneau and moving back into the house when we were done.
However, tenant issues have changed our minds. After four sets of tenants in three years, we decided we didn't want to be landlords anymore. What a freeing thought! After all, who knows when or if we'll decide to be done with cruising? And if we do, who's to say we will come back to Juneau? At this point, I say I want to come back, but what if we fall in love with some other place? The world is a big place after all, with lots of other lovely places in which we may decide to stay. If that happens, we'd have to sell the house anyway, only from a distance. If we do come back here, then we'll figure out where to live. The possibilities are endless!
It is an incredibly freeing thought to be rid of all the trappings of homeownership. After all, we've lived without all that stuff for three years. There is a downside, however, and that leads me to the reason we are back in the house. Something has to be done with all those trappings, and Joe and I have been homeowners for a number of years, not to mention parents! That garage of ours is stuffed with a lot of--well, most of it really is just stuff. There are some precious things we want to keep--artwork, photographs, some family heirlooms and the like--but it all has to be gone through with a fine-tooth comb.
The whole minimalist movement has amused me. I mean, we live on a sailboat. We don't have that much we live with, or so I liked to tell myself, but I conveniently forgot the crapload of stuff squirreled away in the garage! Maybe I need to watch Marie Kondo's show after all. I haven't seen it or read her book, but I seem to recall she talks about keeping only the things that fill you with joy. (If I'm wrong, someone set me straight.) What does she have to say about nearly everything you own fitting on a 37-foot sailboat? I can't say that anchor sparks joy, but being able to stay safely in one spot in a gale is extremely reassuring! 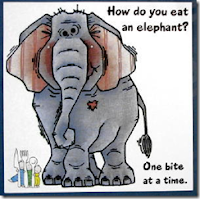 I am a little bit worried about revealing the contents of boxes that have been sealed up for years. What memories will they evoke? I will be able to let those things go, won't I? If need be, I can take photos and then move on. This gigantic project of cleaning out the garage is just one more step to be taken in our preparation for cruising. Clean out the garage, sell the house, move back aboard Kyrie and get ready to go. Just like eating an elephant, this too will be a matter of one bite at a time. Prep and training is nearly done. The start line is at last in sight!