What a far cry from the last time I wrote! It's just as pretty of a day out, but probably close to twenty degrees warmer. Yes, that equates to only about 42 degrees, but for a spring day in Alaska, that is delightful!
I can tell spring is finally here because we are all bouncing around--and I really do mean all of us. I can't put all the blame on the kids--wanting to be outside in just sweatshirts because it looks like it ought to be warm, but isn't really. Yesterday, Levi was trying to teach Megan how to use his slingshot, firing rocks off the end of the float toward the breakwater. There's a scary thought--the two-year-old with a slingshot...

But let me backtrack a week or so... Can I first just say that Joe's parents were amazing to put up with us for what turned out to be a two-week invasion of their home? When Joe and I called them, begging for a warm place to escape to, we honestly planned on being there for just a few days, but the cold spell lasted for nearly a week. And that wasn't the end of the craziness. I've said it before and I will say it again. This is March. It is officially spring, right? Mama Nature evidently didn't get the memo, or maybe it's just a further reminder to us to not jump the gun and take all the winter coverings off so early next year. Regardless, Juneau--in fact, most of Southeast Alaska--got seriously dumped on with the snow! We received 20 inches between Sunday the 12th and Tuesday the 14th! An article in our local paper said that a dump like that in March isn't unusual--we just haven't had a typical winter in a while! It would figure that we get our first "typical winter in a while" the first winter we have Kyrie here in Juneau. The girls and I came down on Thursday last week while Levi was swimming to clean Kyrie off. Here, for your viewing pleasure, are the "before shoveling" and "after shoveling" photos.

When we got there, the snow on Kyrie's bow was level with the top of my boots and naturally, it wasn't just 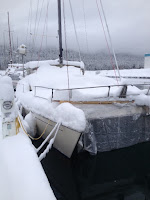 any old light fluffy snow. No, this was the super wet, heavy, do-you-want-to-build-a-snowman snow. I still don't know how Rachael and I managed to get it all off the boat and be able to pick Joe up from work and Levi up from swimming in a little over an hour. Somehow, I thought when we moved out of the house and onto the boat, my snow shoveling days were at an end. HA! 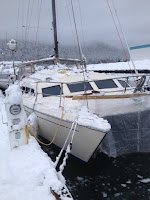 Joe did some calculations and he figures there was close to two tons of snow on Kyrie's decks. Looking at the change in her waterline between pre- and post-snow removal, that seems like a fair assessment. I certainly felt like I moved a ton of snow. One good thing about all this snow is that the kids had a fantastic season at Eaglecrest, our local ski resort. The big kids get to take lessons throughout the winter through our homeschool group and this was the first year in a few that the kids were able to ski the whole season. Not too bad for Rachael's first time skiing. Both kids left me in the dust when we left Megan with Grandma and Grandpa and the four of us went skiing!

But now, thankfully, the weather seems to be changing.  Spring appears to finally be on the horizon.  We can't wait to hank the sails back on and get Kyrie out of the harbor for the first time in 6 months!

That's it. Blow the horn. Pack it in. We temporarily concede defeat! Old Man Winter has won this round.
Read more »
Posted by Kyrie's crew at 10:26 AM No comments: