There are some days that are just filled with being busy. Then there are days like this weekend. It's Monday now and still nice, but this weekend was just amazing. 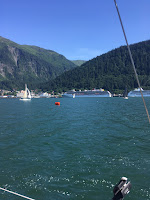 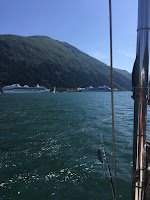 The sailing club held a buoy race Saturday and, as usual, Kyrie was committee boat. A different course was chosen this time, which meant we didn’t have to anchor in 100+ feet of water near a cable, creating a short starting line for the racers! Joe invited a neighbor of ours here in Douglas to come along and they got to crew on one of the boats for the race. That left me and the kids on board Kyrie to watch the race and make sure we recorded everyone’s finish times. The crews all seemed happy with their performances, from what I could see! Joe said they had a great time on Shoreless, scooting along and even burying the toerail at one point. He said his shoes got wet!
That evening we joined a bunch of friends for a Brazil-inspired dinner. Friends of ours are creating a meal from a different country each month and this month was Brazil. We got to try Caipirinhas, which are considered Brazil's national cocktail--delicious!--and Romeu e Julieta, which is an appetizer of cheese (my friend used queso fresco in this case) and a Brazilian guava paste called goiabada, which is simply guava, sugar and water. It's surprisingly good--sweet and salty. Think of proscuitto-wrapped dates or cantaloupe and you get the idea. 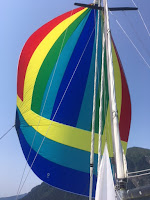 Sunday dawned clear and warm, so after answering a call for help from Joe's parents, we took Kyrie out again. We thought we would try fishing, so we headed down the channel toward Sheep Creek. No luck, but the wind was perfect for a spinnaker run toward the bridge. The wind actually grew lighter as we neared the bridge, so Joe asked me to dig the radial head drifter out of the bow locker so we could give it a try for the first time. Oh my goodness, that thing is gigantic and heavy! But, it was amazing to hoist it and sail. There was about 4-5 knots of wind and Kyrie was moving at about 3-3.5 knots! Look at that giant sail! Isn't it beautiful? I'm not sure it had seen much use--it was still crinkly when we hoisted it. Joe and Rachael sat on the bow while we sailed under the bridge and I watched the drifter deflate, and then, in a moment of perfect hilarious timing, inflate as the two of them blew up toward the sail. 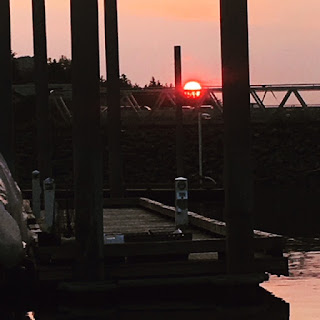 Barbecued chicken and curried couscous with veggies finished the weekend off, along with a paddle in the kayak around the harbor. It was hard to say good night to such a beautiful weekend, but the sun gave a good show before it sank from our sight. All in all, I'd say we enjoyed ourselves thoroughly the past couple of days. Levi is off to camp this week, so it will be just me and the girls during the day, and it's supposed to be nice nearly all week. Days like these make me absolutely in love with our life!

Anyone want to see vacation photos?


I attempted to go through our vacation photos so I could put some in a post to share. Then I ran into a problem. There were too many photos of our awesome trip! I had taken some videos as well, and those are rather difficult, if not impossible, to upload to this particular blog. So instead, I made a link to them. Vacation photos and videos! Enjoy.
Project complete. I can now return to my regularly scheduled program, which, this time of year, is getting ready for the next school year. Rachael gets back from her first Colt Camp session at Echo Ranch tomorrow, so hopefully I will have some stories from her to share.
Posted by Kyrie's crew at 9:17 PM 1 comment:


I'm still working on going through trip photos and writing up more highlights from the trip--because believe me, there will be a part 2 of those highlights. However, I have to interrupt that with a realization. I mentioned in a previous post that there will be times that I'll get a little deeper and share my thoughts and musings over this life of ours. This is most certainly one of those times...

Highlights of the trip, part 1

All right, all right. I freely admit I haven't been as diligent about covering our travels this time around as I was last year. As I said before, we've just been having too darn much fun for me to settle down and take the time to write about it all. I've taken a ton of photos on this trip, however, so I will take some time, pick out some favorites, and let the photos tell the story of this vacation.

A few highlights though... Krestof Sound was a great place to anchor up and play for an evening. We found a little beach that was only available during low tide and lit a campfire. Joe and Pat turned over a bunch of big rocks and found crabs everywhere. Levi poked around in a fortress of old trees and moss and found the Holy Grail of beachcombing--a small glass float. At first, he didn't grasp the enormity of what he found--then Dad and Uncle both informed him they had each only ever found one, and that was when they were kids!
We poked around the old Chichagof gold mine in Klag Bay, up at the very head of Khaz Bay. For once, we were the only boat in the anchorage. It was beautiful and quiet. It was fun ducking through the trees and poking through ruins, treading carefully on old foundations and climbing hills of mine tailings. After a particularly tough hill to climb, Pat announced he found the entrance to the old mine. Somehow, the four kids and Joe and I made it up that slippery hill, rocks sliding down from our feet the whole way up. Totally worth it, though. We found equipment left from a crew who attempted to reopen the mine back in the mid-1980s and although the entrance was completely barricaded by a cave-in, we stuck our heads inside the mine, just to say we have been inside. Thankfully, the way down was much less precarious, having found the old road up to the mine.
After Klag Bay, it was time to cruise the inside route through Ogden Passage and Portlock Harbor, out to the Gulf via Imperial Passage. The whole crew was itching for a stop at White Sulphur Hot Springs! Even though Joe had our track recorded on our chart from the last trip into the West Arm of Mirror Harbor, he still asked Pat and I to stand bow watch on the way in. Still a little nerve-wracking to see rocks underwater that close to the hull... Kyrie made it through the gauntlet safely and Joe and I anchored her up. Then it was time to pack up food and swim gear and hike to the springs!
Later that evening, Joe checked our e-mail and we were tickled to discover that our new friends aboard SV Arctic Monkey were due to arrive at the springs the next day. We met the Morgans the day before we left on this trip, having connected via the Boatschooled Facebook page. They have three girls, close to the ages of our kids, and Rachael especially clicked with their middle daughter, Leah. We had talked up the springs so much to them and now they were going to be able to meet us here! I love that we were able to share a place we love so much with new friends.
After a difficult good-bye to our friends, we went our separate ways back to our boats. The plan was to take Kyrie up to Greentop Harbor the next day, which we had only ever been to once before, nearly twenty years ago. It was not the most comfortable ride--there was a swell with a pretty nasty chop and a couple of times, Kyrie's bow was pointed nearly skyward. Then, upon arrival in Greentop, we apparently entered the wrong way. After tucking behind the safety of Greentop rock, there is a small island named Elbow Island. The portside path looks like the correct route, even though there is a lot of kelp and rocks because it's wider, compared to the starboard path. However, we were greeted by a couple who have a cabin in Greentop and they informed us the other way is safer! Much narrower, but deeper and no rocks to worry about avoiding. We kept that in mind for the way out.
Greentop is well-protected from any waves outside and it is quiet! Pat and Michael took the kayak out to explore the nooks and crannies, while Joe and I took our kids on a hike. A trail would take us across to Lisianski Strait, but it was pretty rough terrain and Megan just couldn't do it. It was still beautiful and fun.